Cashews are commonly used in Indian cuisine and Pakistani cuisine, whole for garnishing sweets or curries, or ground into a paste that forms a base of sauces for curries (e.g., korma), or some sweets (e.g., kaju barfi). It is also used in powdered form in the preparation of several Indian sweets and desserts. In Goan cuisine, both roasted and raw kernels are used whole for making curries and sweets. Cashews are also used in Thai and Chinese cuisines, generally in whole form. In the Philippines, cashew is a known product of Antipolo, and is eaten with suman. The province of Pampanga also has a sweet dessert called turrones de casuy, which is cashew marzipan wrapped in white wafers. In Indonesia, roasted and salted cashews are called kacang mete or kacang mede, while the cashew apple is called jambu monyet (lit. ‘monkey rose apple’).

In the 21st century, cashew cultivation increased in several African countries to meet the demands for manufacturing cashew milk, a plant milk alternative to dairy milk. In Mozambique, bolo polana is a cake prepared using powdered cashews and mashed potatoes as the main ingredients. This dessert is popular in South Africa.

In Brazil, cashew fruit juice and the fruit pulp are used in the production of sweets, juice, alcoholic beverages, such as cachaça, and as a flour, milk or cheese. In Panama, the cashew fruit is cooked with water and sugar for a prolonged time to make a sweet, brown, paste-like dessert called dulce de marañón (marañón being a Spanish name for cashew).[citation needed]

The shell of the cashew nut contains oil compounds that can cause contact dermatitis similar to poison ivy, primarily resulting from the phenolic lipids, anacardic acid, and cardanol. Due to the possible dermatitis, cashews are typically not sold in the shell to consumers. Readily and inexpensively extracted from the waste shells, cardanol is under research for its potential applications in nanomaterials and biotechnology. 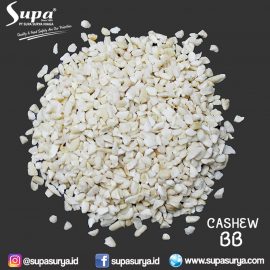